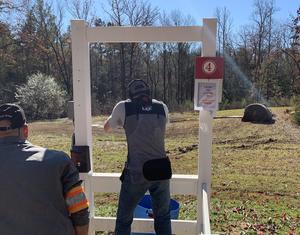 The team, based at the L2IC, competes with teams from around South Carolina

WEST COLUMBIA, SC --  It’s the first year of competition for the Lexington Two Innovation Center Scholastic Clays Team, and not even COVID-19 can put a damper on members’ enthusiasm.


The nine-member team competes as part of the South Carolina Youth Shooting Foundation. Lexington Two’s team competes against public and private schools from around the state, with the next competition scheduled for Saturday, February 20, at Moree's Sportsman's Preserve in Society Hill.


Head Coach David Crossland, a firefighting instructor at the Lexington Two Innovation Center, and Assistant Coach Bernie Adkins, the center’s assistant director, say this weekend’s event is only the team’s second competition. During the first event, the team’s two participating squads placed 12th and 14th out of 30 squads.


“Our team members are excited and feeling confident,” Adkins said of this weekend’s Society Hill event.


“We are still learning the ropes of competing in this sport and are having fun, with safety being our number one priority,” Adkins added.